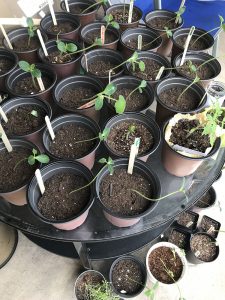 As a practitioner and student of oriental medicine, I have spent the last seven years of my life trying to understand the knowledge and concepts of the human body’s pathological and healing mechanisms through the lens of ancient wisdom that has been passed down to us for more than 2,000 years. Healers and alchemists of ancient times were connected to the Earth’s cycles and the transformation of the elements in ways that I believe human beings are becoming reunited with in a greater capacity than any time in modern history.

Modern research is confirming what we as humans have known down to our cellular DNA since time immemorial: That we are energetic beings that vibrate with the elemental cycles of the Earth and the cosmic cycles of the universe and beyond. Our vibrational frequencies in the form of light and sound exist in many layers that have been studied, felt, and interpreted by many peoples and cultures throughout history. These frequencies exist well beyond our physical bodies and impact and are impacted by the frequencies that we interact with in each of our energetic layers, impacting our states of physical, emotional, psychic, and spiritual existence.

Ancient Chinese Daoists understood the physiological processes of our bodies as a microcosm of the Earth’s cycles: from the weather cycles, to the seasonal cycles, to the lunar cycles, to the 24-hour sun cycle. For example, water provides the generative nourishment for trees. Trees are consumed by fire, their remains forming the earth. The earth settles and through the pressures of environmental forces over years and millennia, forms precious metals and alloys, which attract the condensation of water, and so on. These elemental creative forces of generation and destruction provide the dynamic regulation that maintains the harmonic conditions that sustain human, animal, and plant life.

These elemental cycles can be observed in the human body in all layers of human health: Our lifelong cycles of birth, reproduction, aging, and death; our physical transitions from one season to the next; the monthly female menstrual cycle; and our daily circadian and metabolic rhythms through daylight and nighttime. Furthermore, observing the natural world can inform us on the quality and impact of our environment on our immunological systems.

I am not a botanist, ecologist, nor a chemist. I am, however, an intuitive person, an energy healthcare provider, and most importantly, a gardener and lover of plants. I have been gardening vegetables since I was a kid growing up in a suburb of Cleveland, Ohio. My parents taught me the basics: How to prepare the soil with the right nutrients, when and how to plant seeds, how to water them properly, and when to harvest. In our 10×20-foot backyard plot of land, we grew all sorts of tomatoes, peppers, squash, cucumbers, eggplant, green beans, carrots, strawberries, and raspberries. If you’ve ever grown a garden, you’ll know what I mean when I say that these homegrown vegetables really tasted like vegetables, unlike many of the produce we get from our grocery stores today, due to the fact that many commercially grown vegetables are grown in soil that is completely depleted of nutrients and healthy microorganisms.

When the world went into lockdown mode in mid-March, my partner and I decided that we would start germinating seeds and growing seedlings in our tiny apartment, with just the sunlight shining through the east-facing balcony sliding glass doors. At the time, we had no idea where we might plant these seedlings, perhaps some with hydroponic systems. At the very least, we would give them out to the community and help others grow their own vegetables. We began germinating the seeds on April 17, and now, a month later, many of the seedlings have two sets of true leaves and are ready to be transplanted into the earth.

As the weeks have passed, I have spent more time indoors at home than I have in a long time. I have poured a lot of time, love, and care into raising these little plants, which number around 50 total. These little plants do not have the ideal conditions of sunlight and temperature, and have endured more stress than your average seedlings. Through observing these plants, I have grown to realize that humans and plants need similar conditions to survive and thrive. With my knowledge and study of oriental medicine translating the natural world to human physiology and mechanisms of disease, I learned seven things about human health and immunity through my observation of these plants. The following are my observations. I leave it up to your critical thinking mind to make your own connections between these plants and human health.

1) Plants need the proper nutrients in their soil to survive. Once the seeds germinated, we planted them in several different soils. Some were planted in regular potting soil that included mulch, others in better quality organic starter soil mixed with cocoa core, and others with organic seed starter mix. The first plants barely thrived. Their soil became heavy and thick, with poor drainage and eventually little specks of white mold on top. The second plants did fairly well but not the best; while the cocoa core provided more room to breathe and better drainage, some of the plants began to wilt and die in a week or two, perhaps from a lack of nutrients. The third plants in the organic seed starter mix did the best, with light soil for their roots to easily penetrate and enough nutrients to nourish them.

2) Plants need proper sunlight to thrive. While these plants didn’t have sufficient sunlight, their stalks became long and leggy, reaching desperately toward the window for more sunlight. Some of the plants in the rows further back from the window wilted, but when they were moved closer to the window, they bounced back to vitality.

3) Plants need clean air. These plants have been living on a four-tiered wooden shelf next to the balcony sliding glass doors. On sunny days, I would put them outside on the balcony to enjoy some direct sunlight from 1-3 hours per day. The balcony faces a relatively busy road in Boulder. I would put them outdoors and give them a little bit of water. After about a week of doing this, I started noticing that on days with more car traffic, the plants would start withering within 5 or fewer minutes of outdoor exposure. Despite being on the third floor, there was still a lot of road dust flying up to the balcony, seemingly suffocating my little plants. I would take them indoors, and within 10 minutes, they would start to perk up and revive.

4) You can’t overwater plants. Their soil becomes moist and moldy, attracts gnats or fungus, and kills the plant from the roots to the stalk to the leaves.

5) Plants flourish with social contact. Each of the seedlings is planted in its own 4-inch pot. Three of the zucchini as well as the edamame were planted in pairs or groups of three. In these pots, I noticed that the plants grew their leaves twice as fast and much larger than any of the other plants that were planted individually.

6) Plants love classical music. Since the beginning of the seedlings sprouting out of the earth, I made a daily habit of playing them classical music – anything from Mozart, to Bach, to modern classical mixes. They always seem to have more vitality and strength with the music playing, with perkier leaves and plumper stems. These are very much vibrational creatures.

7) Plants don’t like to be ignored. After tending to these little seedlings each day, I noticed that on days that I did not spend any time with them, either marveling at their tiny leaves or reading my book on the couch next to them, on these days of neglect, they became slightly droopier and had seemingly less vitality.